Organized by ASSITEJ Pakistan and Theatre I Entertainment Trust India

The current pandemic has shaped various challenges for theater for young audiences. TYA being already marginalized, relatively small and challenging to produce, the current situation has made it more difficult. From our basic needs to adequate resources to create art, we need to understand challenges, think collectively and find solutions for the new normal of the world of children and young people.
TYA Forum focuses on starting conversations, on questions such as how pandemic has affected performing arts and theatre for young audiences, country updates for mutual learning, ways for artists to deal with it and any initiatives and project models that can be adopted.

TYA Forum is led by seasoned artists and arts managers from 6 Asian countries. The forum is open to anyone working or having an interest in theater for young audiences. 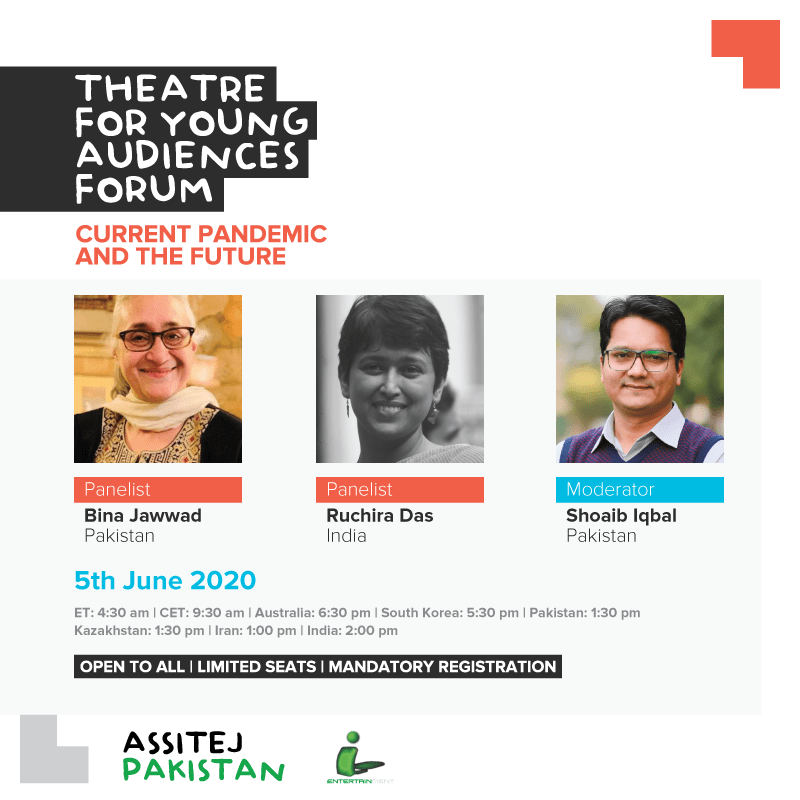 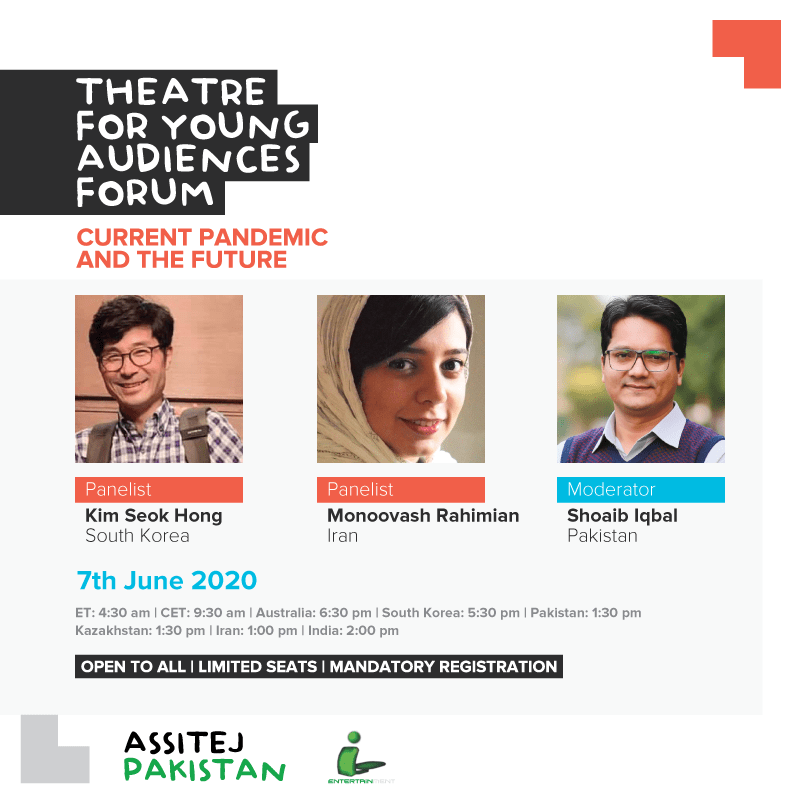 Sue Giles is Artistic Director of Polyglot Theatre, since 2000 leading the company into new territory with interactive works, community process and inclusion of play in the company’s theatrical offerings for children. Sue’s distinct child-centred creative processes have been the subject of masterclasses, forums and discussions nationally and internationally including key industry events in Sweden, Norway, London, Singapore, UAE and USA.

Seok-Hong-Kim
Seek-Hong Kim been working for the performing arts field for more than 20 years as an arts manager and administrator. During the time the Theatre for Young Audience has been a very important part of his career and life. He has worked for ASSITEJ Korea as the secretary general and a board member for several years

She is an Iranian artist and a member of ASSITEJ Iran. She has a Bachelor of Arts in theater from Sooreh University, Tehran, she has also been working in the theater for nine years, five years in TYA. She is working as an actress and has experience in directing, puppetry, voice acting, journalist etc. She also works in the International section of Iran`s International TYA festival. She has been awarded two times as best TYA actress of the year in Iran. Minoovash is one of the person now leading Assitej Network “Next Generation”.

Ruchira Das
Early in her career, Ruchira Das decided to leave the corporate world to follow her heart and work with the arts. After 15 years of working with various arts organisations across India, in different capacities, she founded ThinkArts in December 2013.

Based in Kolkata, ThinkArts works towards bringing a diverse programme of literary, visual art, dance, theatre to children and young people in several cities across India. They also curate the Junior Kolkata Literary Meet.Ruchira works with several educational and arts organisations across India as a freelance artist and consultant and is the deputy director of ARThink South Asia.

Bina Jawwad
Bina Jawwad is a renowed Dance performer of Pakistan. She is also founder of institute of Harsukh. Harsukh is a community of artists, thinkers and organic farmers which is promoting an alternative view of life that is deeply rooted in our culture.

Imran Khan
An Actor, Director and storyteller. Imran is the founder of Theatre I entertainment Trust an organisation working I the field of theatre exclusively for the pas 14 years in New Delhi. Imran has acted and directed in multiple national an International theatre productions which were performed in countries like India, Nepal, South Korea, Italy, Malaysia and Singapore etc. He has trained children and professionals in countries like, South Korea, Hong Kong, South Africa, Sri Lanka, Iran, South Korea, Italy, Germany, Azerbaijan etc.

Shoaib Iqbal
Shoaib Iqbal is an arts manager who has worked as curator, director and arts educator of arts projects since 2000. He founded The Little Art, a non-profit arts education organization that uses art to promote positive social values through innovative learning opportunities among children and young adults, especially marginalised. Shoaib also founded the Lahore International Children’s Film Festival which has been organised annually in various cities since 2008. Shoaib post-graduated from DeVos Institute of Arts Management (Kennedy Centre, Washington D.C.), holds a diploma in International Development from East Side Institute NY and 2013 Asia21 fellow with Asia Society, an Acumen 2015 fellow, 2015 ArtThink South Asia fellow and 2018 EHF New Zealand Fellow. Shoaib worked with British Council as Head of Arts, Pakistan for two years in 2017-18 and currently leading The Little Art as Director, and serving ASSITEJ Pakistan as President.

Finest arts education offers for children and youth in Pakistan on WhatsApp;
1) Save number in your phone: 03324387626
2) Send your name as message to us via WhatsApp

Get Updates Here
Go to Top